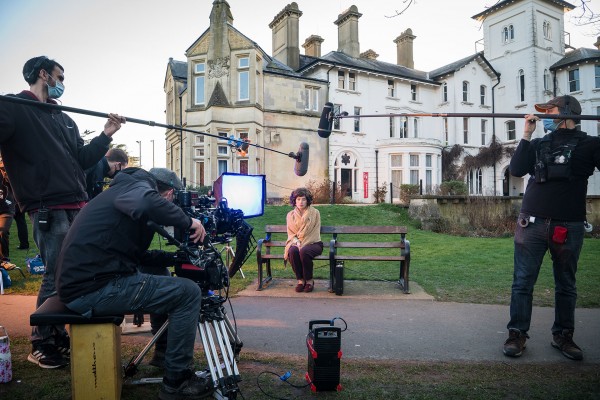 ‘The Gallery’ is an elevated genre hostage drama-thriller set in 2 time periods – 1981 and 2021. Both years are of considerable political, social and cultural significance to the UK and the nuanced story reflects this.

The writer-director is Paul Raschid (28 years) who directed ‘The Complex’ (released April 2020) and was writer-director on ‘Five Dates’ (released November 2020). The cast is headlined by George Blagden (Louis XIV in ‘Versailles’ and ‘Vikings’) and Anna Popplewell (Susan Pevensie in the Narnia franchise). Also in the cast are Kara Tointon, Rebecca Root, Shannon Tarbet and a number of actors from diverse ethnic backgrounds.

The production was originally due to film in Malta in June 2020. The pandemic first caused a postponement of production and then after the UK Government introduced the Coronavirus Film and TV Re-start Scheme; the production re-located to the UK and found it’s way to Finchley. The production has benefitted from a strong community spirit. By locating itself almost entirely at Stephens House & Gardens the production has been able to semi- isolate itself. The cast and crew is mainly London based. The key equipment supplier is a company based in Acton and many of the portraits seen in ‘The Gallery’ have come from former students of Insight School of Art, Whetstone.

‘The Gallery’ will be released both as an interactive film and in a linear version. The linear version will be a diptych – two films – which can be seen back-to-back or separately. One film is set in 1981 and the other in 2021. The producers are aiming for a Festival launch in either late 2021 or early 2022.

Said Neville and Sagarika Raschid – the film’s producers and Paul’s parents – “ Malcolm Godfrey, Christine Becks and the staff of Stephens House have been invaluable collaborators in this very special Brit. enterprise. We owe them a huge thank you for all they have done to help make the project happen over 7 exhilarating weeks. If ‘The Gallery’ can do a little for ‘Stephens House’ what ‘Downton Abbey’ did for ‘Highclere’ we’ll be delighted.”